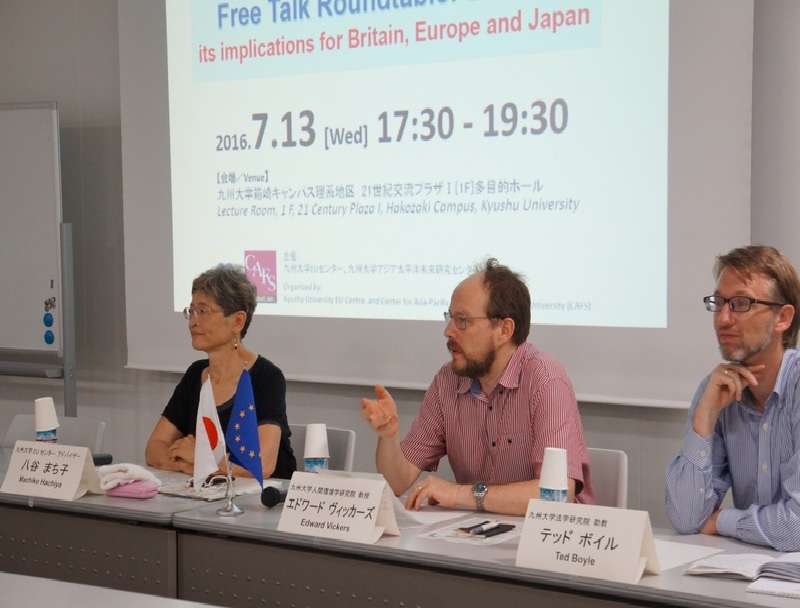 On 13 July, 2016, EU Centre and CAFS jointly-hosted a round-table event to discuss the UK’s recent Brexit vote. The speakers were Machiko Hachiya (Adviser to the EU Center and Researcher at the Law Faculty), Edward Vickers (Professor, Faculty of Education) and Ted Boyle (Assistant Professor, Faculty of Law and KUBS).

The three speakers spoke first for about forty-five minutes in total, ranging widely across the possibly origins of the Brexit vote in education, immigration and demographics, the visible and possible effects of the vote on politics in both the UK and EU, and the importance of the rhetoric of control, as well as their personal experiences of the vote and its aftermath.

The remainder of the time was spent engaging with the audience’s questions, which ranged widely across such issues as the use of referendums to settle political issues, the future position of Scotland within the United Kingdom and EU, the referendum as a result of Conservative Party infighting, and the possible economic implications of the vote. Despite the foul weather, it was a well-attended and lively session that served as a form of therapy for the two British participants.

Particular thanks to all the staff at the EU Centre, without the cooperation of whom it would have been impossible to put this event on at such short notice, and for their willingness to stay late and help make it a success.